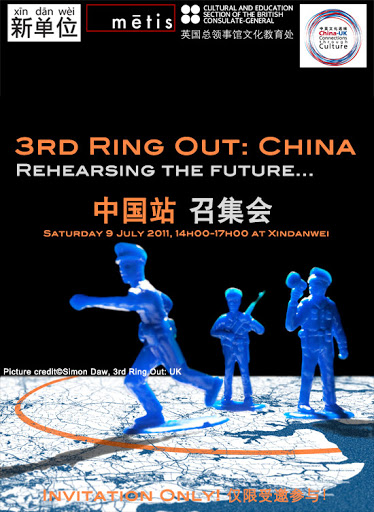 WE DON’T INHERIT THE WORLD FROM OUR ANCESTORS, WE BORROW IT FROM OUR CHILDREN

In July 2011 Zoe Svendsen and Simon Daw visited China to meet with artists, climate specialists, journalists and art producers to discuss how the issues explored in 3rd Ring Out relate to contemporary Chinese climate change questions, art and performance. We did a presentation at Xindanwei in Shanghai, to artists, cultural producers and media people all concerned by climate change. This was followed by an open space discussion, where the topics ranged from questions of the relationship between art and education, to the decisive split between city and rural areas in terms of climate impacts (for those living in the resource-hungry cities, climate decimation feels remote, even when encroaching, as is the case with the desertification outside Beijing).

In Beijing, we held two round-table discussions at the British Council, using 3rd Ring Out as a catalyst to explore climate change issues. The first was with climate journalists from a variety of organisations, including CCTV, Global Times, the China Information Centre, 21st century Business Herald and China Dialogue. The second was with climate scientists, teachers and British Council climate champions.

In Guiyang, Zoe gave a presentation at the annual international Ecoforum, participating in the education panel.

This project was conceived of and produced by Rachel Parslew, inspired by 3rd Ring Out.

It was supported by a British Council Connections through Culture grant and the Sino-British Fellowship Trust.

Many thanks to aaajiao, Zhou Liping, Xindanwei, Rebecca Nadin and the arts and climate change teams at British Council China for making the trip possible.

Articles on Climate Change in China

The diversity of climate-related problems facing China is breathtaking.

Here are some issues of interest:

The problem with pigs…

A greener city, house by house

Get the kids back to nature

Green Anhui and the grass-roots way

Full circle for bikes in Beijing?

Reuse your chopsticks! Deforestation and the Greenpeace campaign

Thank you to Wang Kai, Lin Lilian, Zhou Wei, Rachel Parslew and others for links and research.