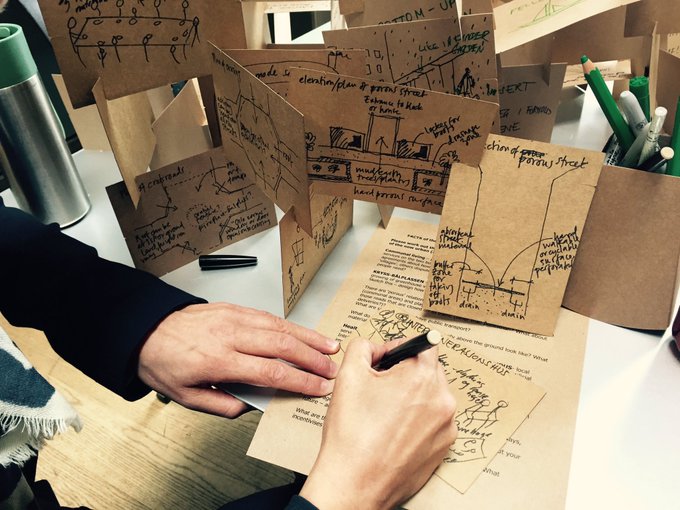 METIS was selected as a contributor to Oslo Architecture Triennale 2019 with our installation project the Factory of the Future.

Oslo Architecture Triennale (OAT) is the Nordic region’s biggest architecture festival, and one of the world’s prominent arenas for dissemination and discussion of architectural and urban challenges.

View The Factory of the Future here

OAT 2019 – Enough:
The Architecture of Degrowth

Around the world campaigners, cities, and governments are declaring a state of emergency in response to accelerating global warming. Meanwhile systemic inequality continues to entrench deep divides between those who have far too little, and those who have far too much. In this unprecedented moment, an urgent question is cast into relief: how should architecture respond to a time of climate emergency and social division?

In late September 2019 Zoe Svendsen travelled to Norway to install the Factory of the Future and participate in workshops and talks as part of OAT.

FACTORY OF THE FUTURE  |  FREMTIDSFABRIKKEN

With citizens, urban planners, economists and architects, the Factory of the Future imagines future scenarios of human and planetary thriving.

The project firstly imagines London, now in an era of complete financial transparency and accountability and then Oslo, flourishing after the end of the era of oil. A fortnight of workshops during the Triennale is generating conversations and stories that imagine a post-carbon, post-growth Oslo – and what it might mean to see ourselves as an element in nature rather than masters over it. This future is a time of repair and recuperation from our previous lives embedded in ‘high carbon culture’, replacing dependency on carbon with an interdependence between ourselves and the world around us.

The installation brings together multiple stories of this new normal of everyday life in cities that foster ecological flourishing. Just like walking through a city, snippets of conversations are heard giving glimmers of different ways of living and testifying to overlapping but multiple realities. The Factory of the Future does not present Utopia – rather the installation offers partial and provisional scenarios, over almost 10 hours of story-telling, in continuously changing configurations. What is captured is the act of imagining itself: each actor has developed their own stories, drawing on a collaborative endeavour to create the ‘facts’ of this alternative cityscape, through conversations with local citizens, urban planners, conservationists, economists and architects.

If perceptions of human responses to climate change often stage people as individual tragic heroes, too wedded to fossil fuels and financial profit, and too flawed to be able to alter, then Factory of the Future suggests otherwise. We could instead imagine ourselves to be on an epic journey that has more in common with a Norwegian saga than a Greek tragedy. In defiance of consumer capitalism’s mantra of ‘no alternative’, this gathering of near-future potential suggests that the contemporary slide towards climate apocalypse is by no means inevitable, bearing witness to the fact that we could change the ending of the story.

Those who tell the stories rule the world.

5 minutes:    have a wander around, allow the plethora of different stories to wash over you

10 minutes:   find a story you like the sound of and stay with it, listening on headphones

15 minutes:   have a glance over the story summaries on the shelves, have a look at the character biographies

20 minutes:   peruse the maps to see where the stories take place and what has been transformed

2 hours: take a wander around the real Bjørvika and Grønland and re-see the present through the lens of an alternative future

30 days: return to see the portraits of Oslo, in situ from 24th October

Anytime: look up the materials that made the installation in the Triennale’s online ‘Library’.