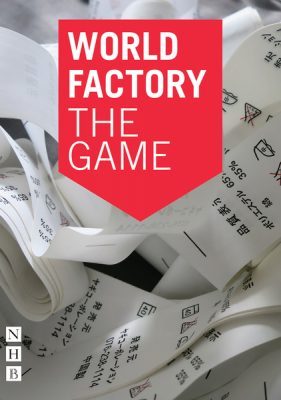 The evening featured a series of bite-sized talks by experts in the field, followed by an opportunity to try the World Factory game, using the book.

From the factory floor to the catwalk, from Shanghai to London, World Factory weaves together the untold stories of people connected by the global textile industry.

This published edition of World Factory: The Game adapts the highly successful, provocative and participative theatre production for the page, offering readers the opportunity to play – as individuals or in teams – the managers of a clothing factory in China and recreate the experience of the game.

Like a ‘Choose Your Own Adventure’ novel, the game has multiple routes and outcomes, interlinking questions of ethics, fashion, consumer capitalism, environmental impact, working conditions, migration and globalisation. In a cross between Monopoly and poker, players trade in workers and money, but it is a game about values – will you be an ethical factory owner or will profits always come first? In the rag trade, can anyone ever really win?

World Factory was created and produced in 2015 by the performing arts company METIS, in co-production with the New Wolsey Theatre, Young Vic, and Company of Angels. It was performed at the Young Vic, London, and on tour of the UK.

'Many of us like to think of ourselves as ethical shoppers, but World Factory brings the murky economic realities of the globalised textile industry uncomfortably close to home. This clever and entertaining show… is part documentary drama, part game – and the result is smart, mischievous and genuinely thought-provoking'

'A smart, complex and genuinely thought-provoking exercise in game theatre: this ingenious thought experiment from Zoë Svendsen and Simon Daw [is] an ambitious, provocative and intricate piece of game-making, evading easy answers and polemic while succeeding inmaking us think – and think hard – about the cost of our clothing'