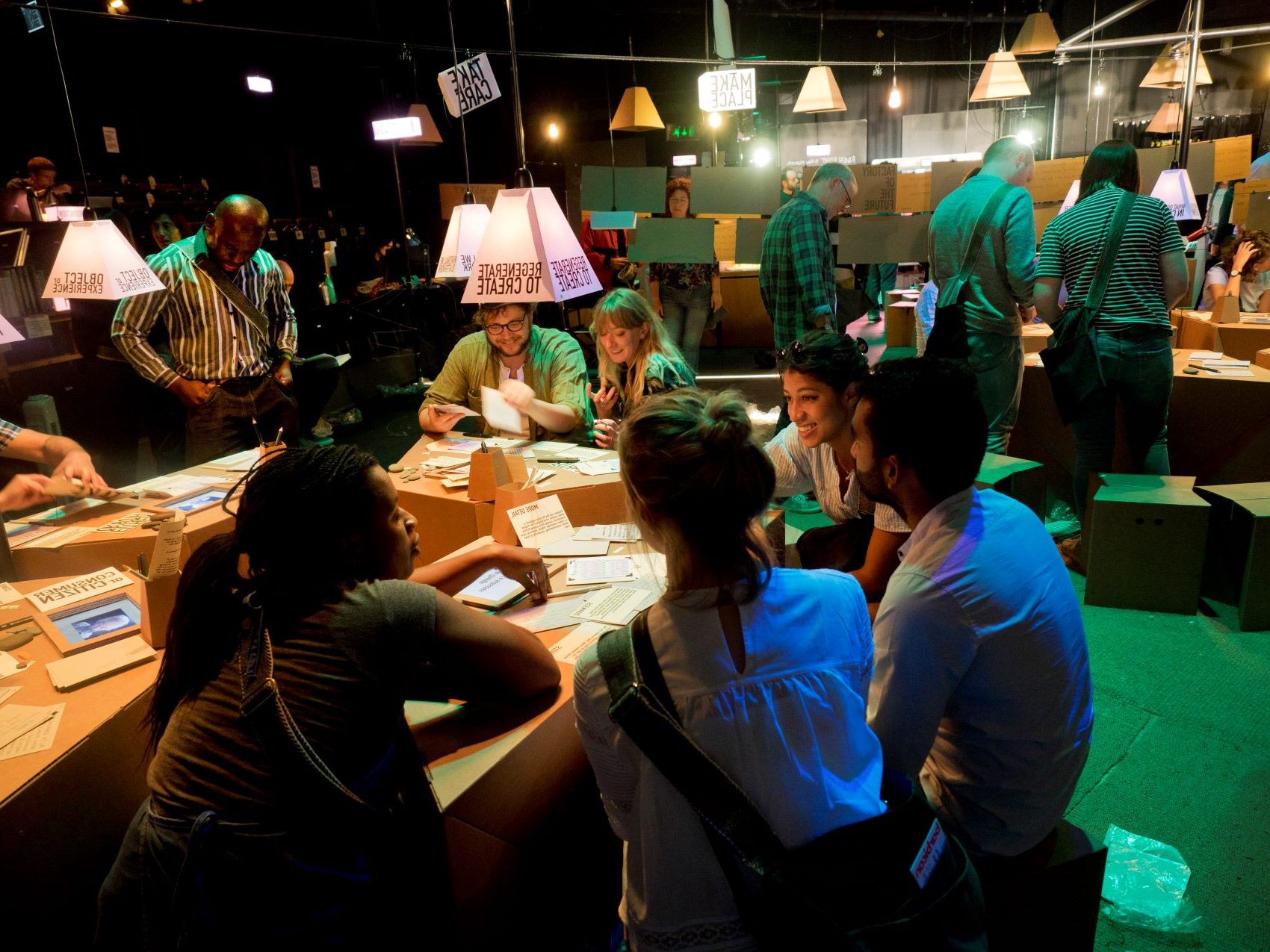 WE KNOW NOT WHAT
WE MAY BE

So says Ophelia in Shakespeare’s Hamlet – articulating the motivation for this interactive installation: to work out who we might be in an alternative future, a future that creates a more just society, and in doing so averts runaway climate change.

WE KNOW NOT WHAT WE MAY BE is a collaborative and immersive experiment for the invention of the future – putting people at the heart of the decision-making process.

Commissioned by Artsadmin for their Green Commission 2018, WE KNOW NOT WHAT WE MAY BE was presented by the Barbican in September as part of its 2018 season, The Art of Change, which explored how artists respond to, reflect and can potentially effect change in the social and political landscape.

Performance installation at the Barbican in London, Sept 2018 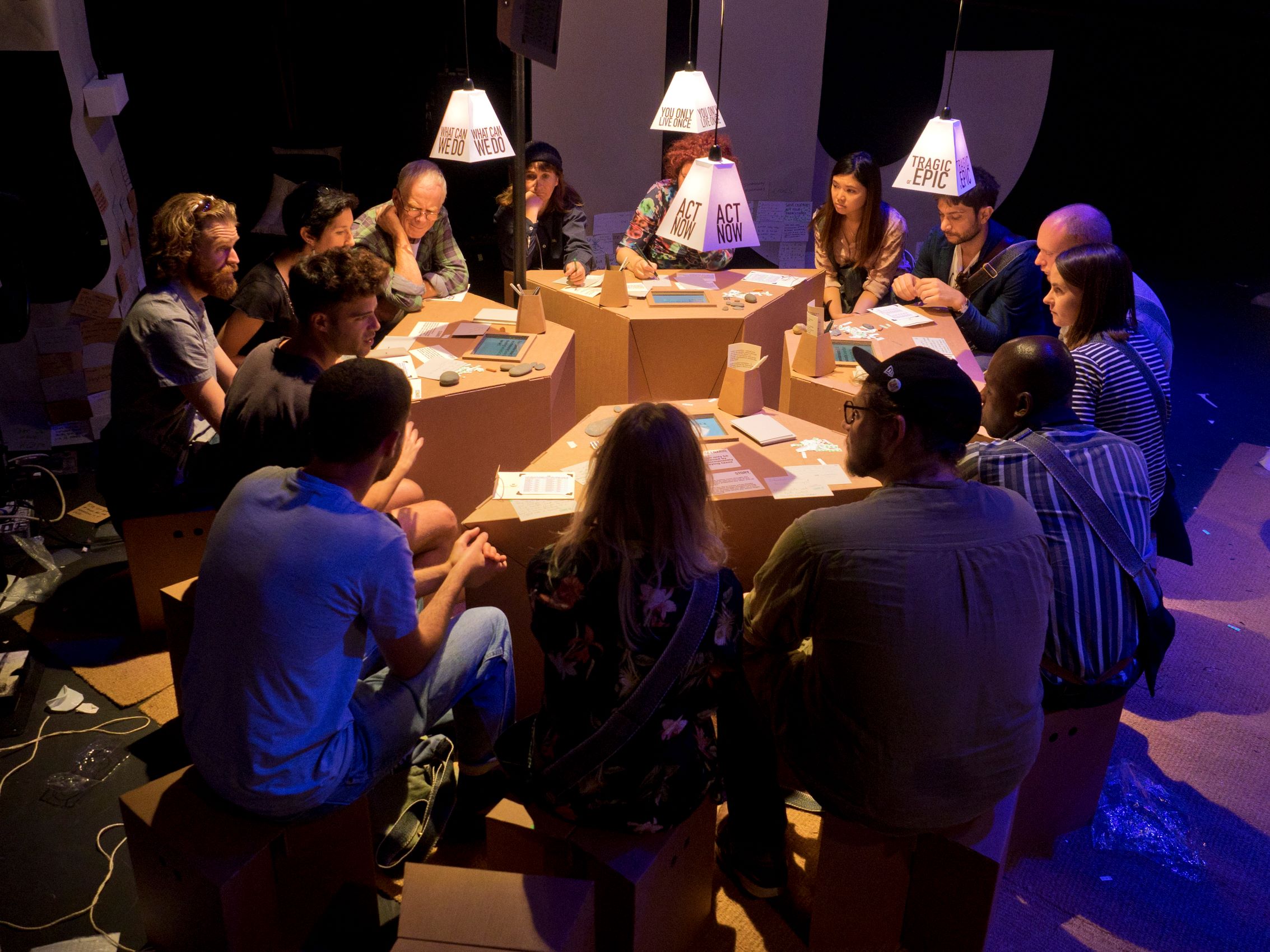 A journey round WE KNOW NOT WHAT WE MAY BE

WE KNOW NOT WHAT WE MAY BE evolved continuously over  5 days, with a new ‘generation’ of audience entering each hour. Shouldering a bespoke artisan bag with all they would need, the audience were led into the bowels of the Barbican. Before participating in the Factory of the Future, they met an expert speaker who shared their vision of an alternative future – covering topics as diverse as AI, food futures, energy, architecture, and post-capitalism.

A great iron door drew back and then, primed, the next generation entered the Factory of the Future – in which previous ‘generations’ were already collaborating on imagining future possibilities.

offered a kind of parallel near-present – a Factory of the Future for imagining scenarios. Scenarios on postcards circulated and each was discussed, modified and fleshed out across a series of conversations. Each scenario represented an alternative economic idea that was ‘near-future’ – a respected, but not-yet existent proposition for how to do things differently.

each took their own time before people decided whether they would vote for a scenario to be taken forward. This would often take several ‘generations’ of conversation. Music enveloped the space, making discussion private. Periods of ‘commitment’ alternated with times when the sound of birdsong heralded the possibility of moving on, of beginning a new conversation – together or with others.

FLYWAY TO THE FUTURE

Once enough people had discussed and signed up to a scenario – and this often took a few generations of audience – the scenario was then passed to the 2040s for modelling. On their way to the 2040s, audiences explored the FLYWAY TO THE FUTURE, which displayed the outcomes of scenarios – accumulating over the five days of the installation.

AN EVOLVING SPACE OF PLAY

Gradually, over the course of the installation, the lettering on the surrounding walls, spelling out TRAGIC or EPIC, became covered in postcards gathered across the research process, and from the installation audiences, detailing what they thought would make the world a better place. At the same time, the space became messier – both pleasurably, through peoples’ inventive appropriation of the space – and also choked with the debris each audience member was asked to discard before leaving the space.

After the flyway of the future, people entered the 2040s.

The 2040s is not a precise date: it is a time, near enough to touch, yet far away enough to imagine things have changed. In the 2040s people could trial THE NEW NORMAL: exploring the question, what if the scenarios envisaged in the 2020s had become everyday life?

was a making space, in which we imagined what our world would be like if the scenarios voted through had become our everyday normality. Impacts, outcomes, events, places, life roles, job titles, city transformations, energy transitions were imagined.

Sometimes this involved people writing the biographies of people of the future. Sometimes it inspired people to make collages, inventing a different future formed from the images of today.

PREPARATION FOR ACTING ON IT

The making space of the 2040s was also where the performers gathered material to create improvisations in the COLLABORATORY – holding conversations with audience members, checking up on what people had written in response to the latest scenarios voted through, exploring what was being added to the model.

was where a series of performance montages by performers, using the City slice or the map of the City of London, took this unfolding vision of the future to explore the perspectives of the people of the 2040s.

Performers used character, voice, video, collage and music to envisage a future in which the scenarios have become everyday life.

No one of our postcard scenarios would, on its own, be the catalyst for a total transformation. But together, these different propositions opened up a world that not only plausibly side-swerved climate catastrophe, it became a concretely imaginable human environment that was interconnected, co-responsible, and quite a lot more fun for a lot more people.

Below are some of the modes we used in the COLLABORATORY to explore a lived, felt future under alternative economic conditions:

VOICES FROM THE FUTURE
An improvisation game that spotlights people, places and events living the NEW NORMAL.

CITY TOUR
Taking us on a tour of everyday lives in the NEW NORMAL.

WE KNEW NOT WHAT WE WERE
A live radio show that likes to look back to the crazy teens of the twenty-first century from near its mid-point, the 2040s.

REALM OF OPPORTUNITY
What possibilities do the scenarios that make up the new normal have to offer? What kinds of city redesign might this mean?

CITY OF DREAMS
Every now and then, people from 2018 tell us what they imagine when asked to envisage a better future.

The act of working out how to imagine a better future is not the same as attempting to create Utopia. There was never one single future at stake – no single best possibility, and no prediction about how it all might turn out. Rather the form held multiple directions for the future in play.

WE KNOW NOT WHAT WE MAY BE was commissioned and produced by Artsadmin, and was part of the Season for Change: Inspiring Creative Actions on Climate Change, as well as the Barbican’s Art of Change season.

The development of the ideas was supported by a wide range of producers and funders – and strongly influenced by the research and visions of all our speakers. 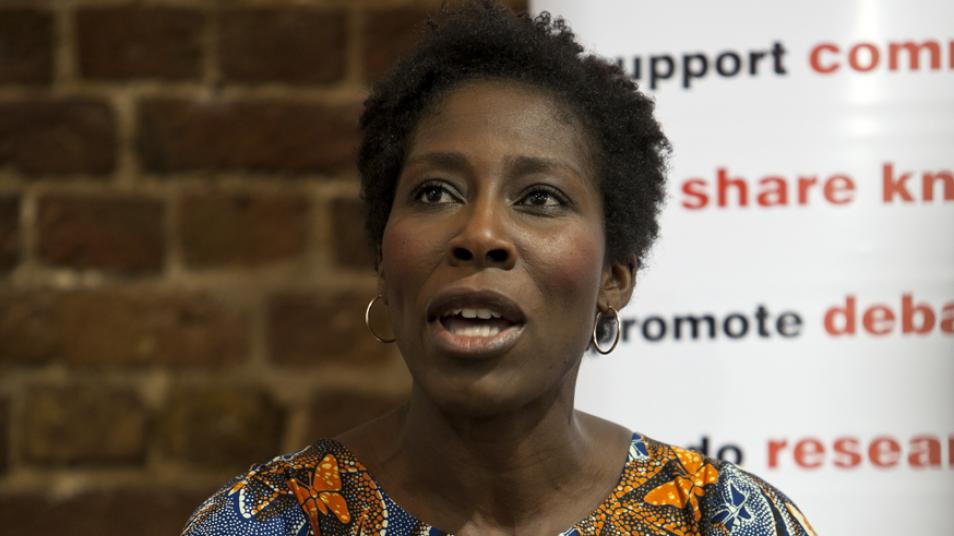 With thanks to all our supporters, funders & partners...

WE KNOW NOT WHAT WE MAY BE was supported with public funding by the National Lottery through Arts Council England with additional support from Attenborough Centre for the Creative Arts, Barbican London, New Wolsey Theatre, Cockayne – Grants for the Arts and The London Community Foundation, J.E. Wilson Fund and University of Cambridge. It was developed as part of the Future Scenarios Networked Residency for the Culture and Climate Change project, supported by the Jerwood Charitable Foundation, Open University and Sheffield University. 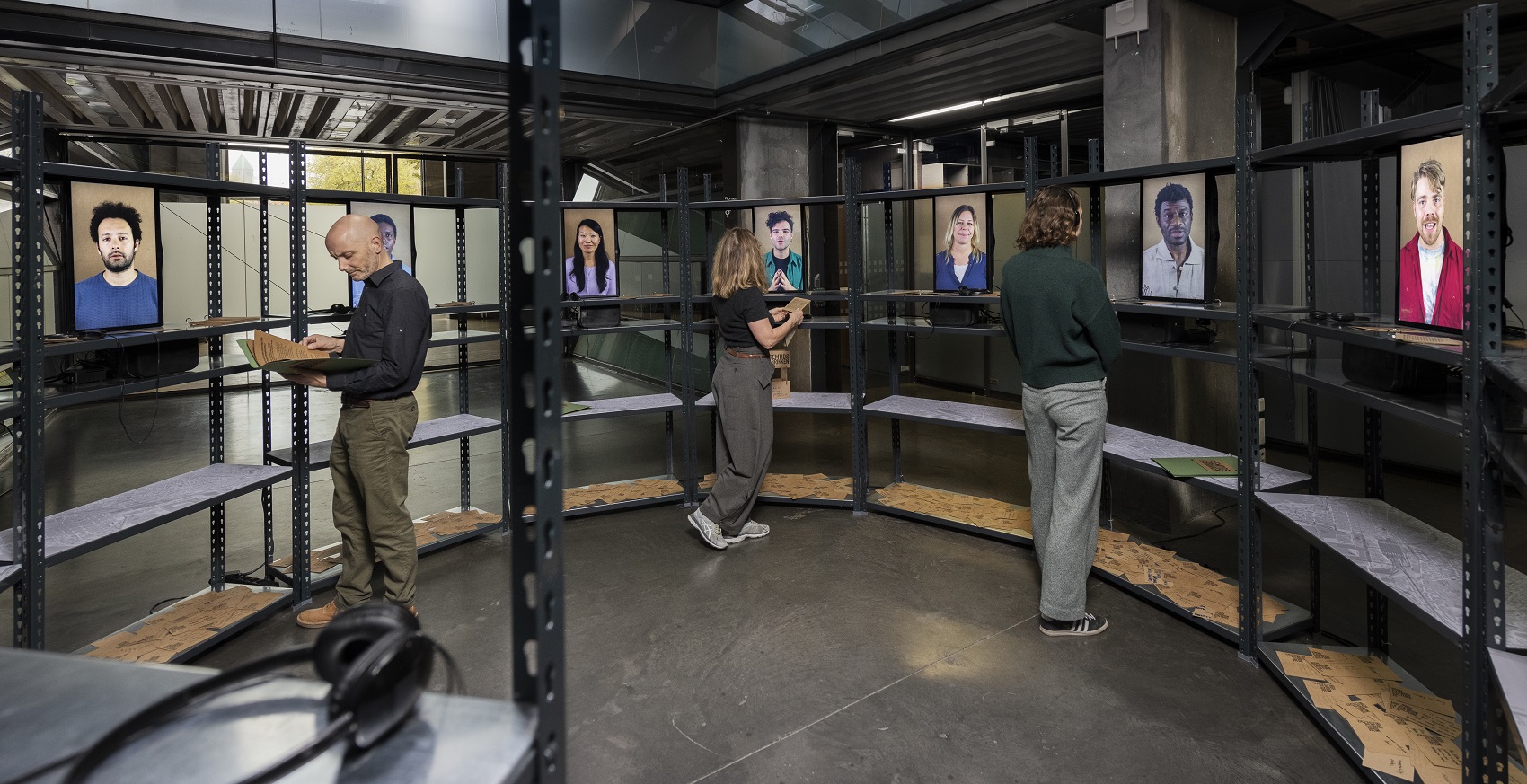 Factory of the Future 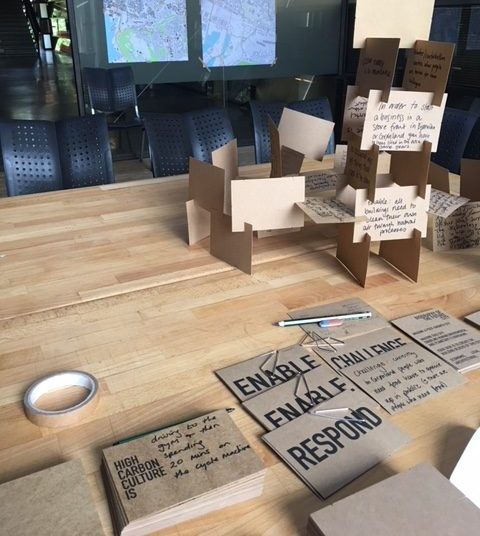 Love Letters to a Liveable Future: The postcards 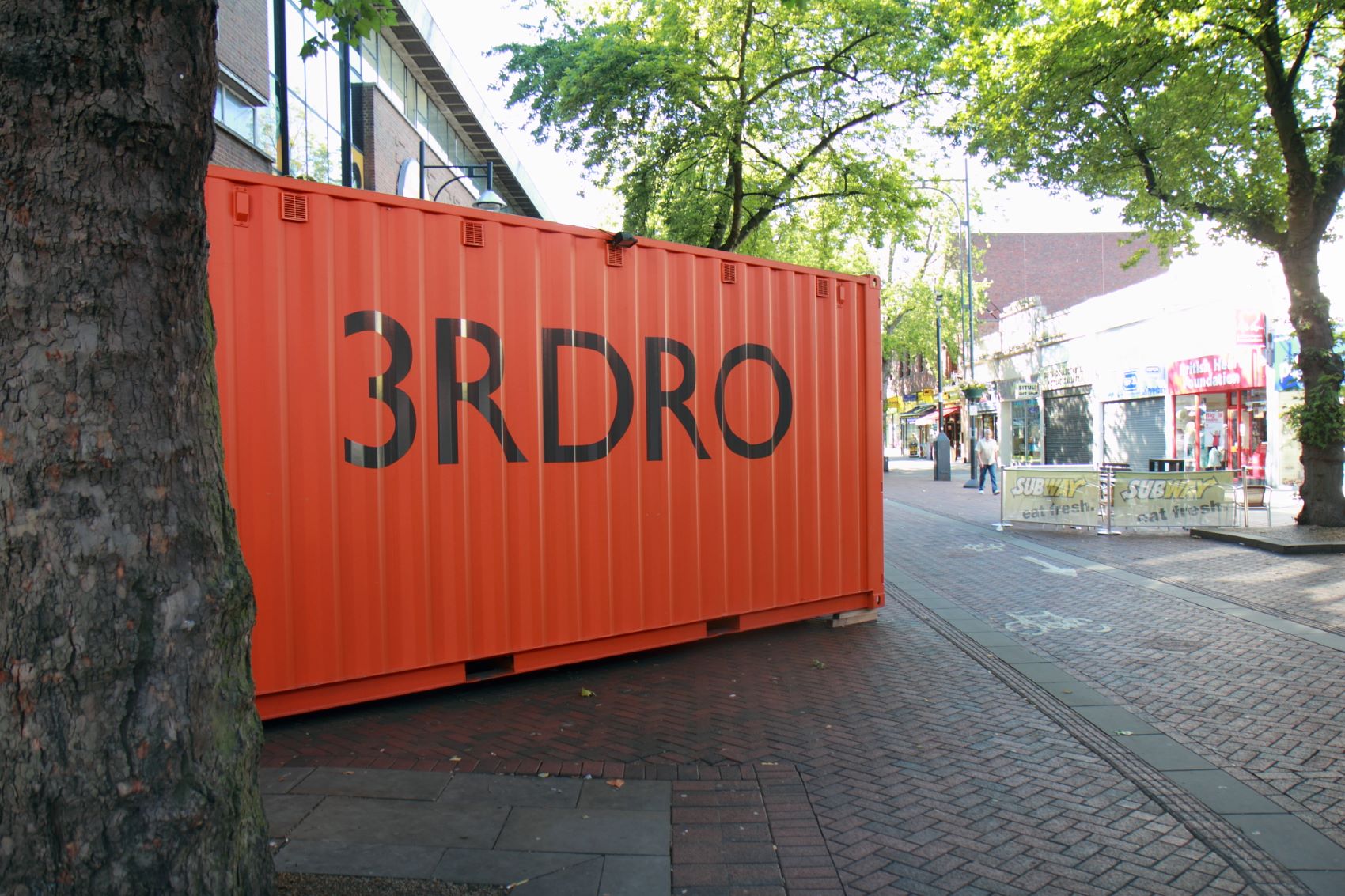