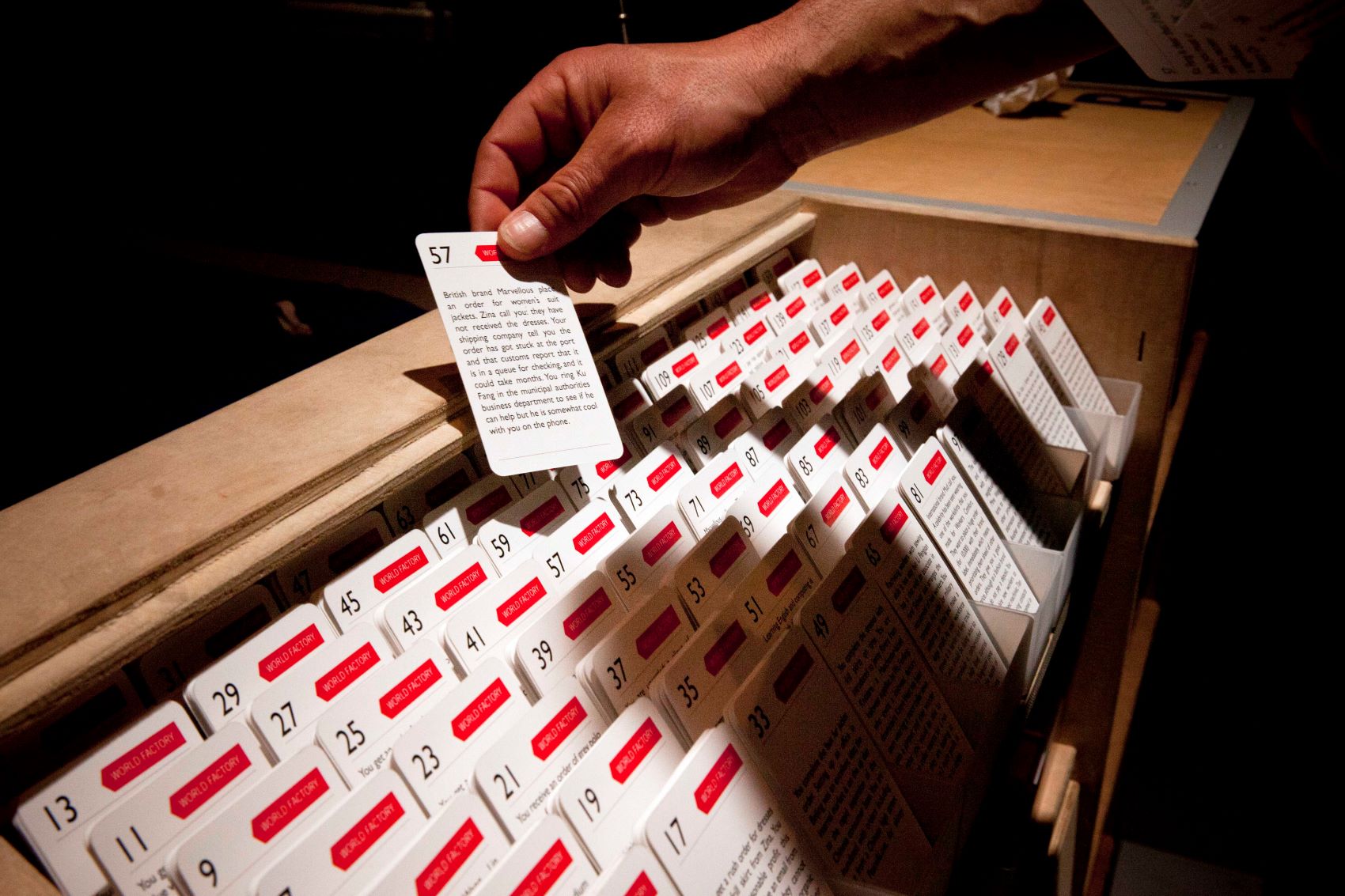 MADE IN CHINA. SOLD IN BRITAIN. WORN BY YOU.

From the factory floor to the catwalk, from Shanghai to London, World Factory weaves together stories of people connected by the global textile industry. Riffing on our awareness of mass production and vulture capitalism, Zoë Svendsen and Simon Daw invite you to play a provocative game.

Which card will you draw? Will you be an ethical factory owner? Or will profits always come first? In the rag trade, can anyone ever really win?

Featuring stunning video and a powerful score, World Factory is a thought-provoking investigation of fast fashion. World Factory explores global consumer capitalism through the lens of the textile industry, from the heart of the industrial revolution in nineteenth-century Manchester to the world behind the ‘Made-in-China’ labels on our clothes today.

WATCH A VIDEO OF EXTRACTS FROM THE SHOW

Audiences of up to 96 at a time are seated round tables within a catwalk/factory floor bespoke design system. The show opens with a catwalk extravaganza of quotations from Reagan, Thatcher and Deng Xiaoping, pinpointing the geopolitical origins of contemporary consumer capitalism, followed by stories from the frontline of the world factory phenomenon, from the UK’s history to the production of fast-fashion in present-day China.

At the heart of the performance is a scenario-based card game in which audience members, in small teams, play factory managers running a clothing factory. Dealt by a ‘dealer’ (performer) managing four teams, the stories unfold to a backdrop of video imagery and an increasingly sinister power-dynamic in relation to the dealer and their facilitation of the game.

A bespoke sonic system gives each ‘factory’ team a unique experience specific to their chosen path through the game. The game has multiple routes and outcomes, interlinking questions of ethics, fashion, environmental impacts, working conditions, migration and globalisation. Casino-style, audiences trade in workers and money – but it is a game in which the audience had to decide what it means to win.

The project World Factory is supported using funds from the National Lottery through Arts Council England, Cambridge Humanities Research Grants Scheme, Max Planck Institute for the History of Science in Berlin and the Sino-British Fellowship Trust, as well as with the support of the New Wolsey Theatre, Ipswich; Young Vic; Company of Angels; Free Word; Centre For Chinese Contemporary Art (CFCCA); CSV Media Clubhouse, Ipswich; Birkbeck Centre for Contemporary Theatre; National Theatre Studio; Grass Stage; and the MPhil in Public Policy, Digital Humanities Network, CRASSH, Judith E Wilson Fund and the English Faculty, all University of Cambridge. BICC (the British Inter-University Chinese Centre funded by the AHRC) has supported research for events in Manchester and Shanghai. The University of Leeds has provided expert advice. The digital quilt and app technology is provided by theFusion Works.

METIS worked with Shanghai-based Chinese theatre director Zhao Chuan and his company Grass Stage to undertake the research and development for the project. From the pooled research, Grass Stage and METIS each produced a theatre production germane to their own social and political contexts. This show was researched by having a shirt manufactured in a Chinese factory.

Simultaneously, our collaborator Zhao Chuan has made a new piece of performance work about the topic – the first version of this work has toured China in June 2014, with a second version presented in November. METIS gave workshops as part of Grass Stage’s residency at OCAT gallery space in the factory city Shenzhen in Southern China in November 2014.

We'd love to hear from you!

Please note that by supplying your details you are agreeing that we will hold them, and the correspondence, on our database. We won't share them with any third parties.